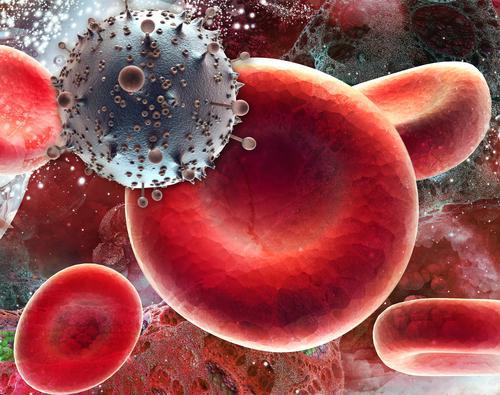 Acute renal failure (ARF) is a common complication in HIV-positive patients for the human immunodeficiency virus (HIV).It occurs on average 4.5 years after the diagnosis of seropositivity. The etiologies of the IRA are multiple. Acute tubular necrosis of ischemic origin is the leading cause of ARI in HIV patients. It mainly complicates shock and sepsis. It is favored by the volume depletion frequently observed in this population exposed to vomiting, diarrhea and lack of intake. It should be noted the possibility of acute tubular necrosis related to rhabdomyolysis especially in drug addicts. Other renal disorders described in HIV patients are primarily HIV-related nephropathy, thrombotic microangiopathy, but also primary and postinfectious glomerulonephritis, interstitial immunoallergic nephritis, and crystalluria.

Nephropathy of the human immunodeficiency virus:

HIV-related nephropathy is a progressive kidney disease that affects both the glomerulus and tubulointerstitial tissue. It accounts for 10% of the etiologies of end-stage renal disease (ESRD). It mainly affects black males whose epidemiological projections suggest that it will be the third leading cause of TIA after diabetes and high blood pressure (HTA).

The pathophysiology remains unclear but would involve genetic factors with renal cellular responses triggered by HIV proteins, as has been demonstrated in transgenic mouse models. It develops in seropositive patients, most often in the stage of human immunodeficiency syndrome (AIDS) (CD4 count <250 μl -1 ); a notion of intravenous drug abuse is found in more than half of the cases.

The intensity of proteinuria is variable, it is sometimes nephrotic. Urine sediment analysis may reveal tubular epithelial cell debris in urinary sediment.

On ultrasound, the kidneys are of normal echogenicity and large.

The renal biopsy puncture (PBR) confirms the diagnosis by showing a severe form of segmental and focal hyalinosis with podocyte lesions (vacuolation and hypertrophy), collapse of the glomerular floculus, microcystic dilations of the tubules and interstitial fibrosis sometimes infiltrated by inflammatory cells. Glomerular disease itself is not specific; it can be found in primary glomerulopathies or in heroin addicts. However, the detection of such names in an HIV-positive person makes it possible to retain the diagnosis of HIV-related nephropathy.

It can reveal glomerular deposits of complement, immunoglobulin G (IgG) or IgM and sometimes even IgA. The different therapeutic strategies proposed are based on ACE inhibitors, active combinations of antiretrovirals and corticosteroids. These treatments prevent progression to IRT.

IECs have a short-term and long-term nephroprotective effect. The use of captopril (25 mg three times daily) in patients receiving antiretroviral therapy has been shown to slow the course of HIV nephropathy, and similar results are seen in patients treated with fozipril (10 mg d -1 ). . IECs are all the more effective when they are prescribed early.

The real therapeutic hope lies in active combinations of antiretroviral therapy including an HIV protease inhibitor.These have a favorable effect on the evolution of HIV nephropathy. The remission of renal impairment is observed in parallel with the decrease of the viral load, with a maintenance for several months.

Corticosteroid therapy (prednisone 60 mg j -1 ) improves renal function in 2 to 14 weeks and reduces proteinuria.However, it does not modify the vital prognosis: survival at 2 years remains less than 10%. In another French retrospective study, the renal prognosis was better in patients treated with corticosteroids than in untreated patients (relative risk = 0.39 for the probability of dialysis, p = 0.03). In these three studies, the administration of corticosteroids is probably associated with infectious over-morbidity, making the indication of corticosteroids in the immunocompromised HIV subject questionable.

Hemolytic Uremic Syndrome (HUS) is a leading cause of ARI in HIV-infected individuals. It occurs in patients who are profoundly immunocompromised (mean CD4 count = 43 μ l -1 ). It seems frequently associated with a cytomegalovirus infection. Extrarenal manifestations, neurological or digestive, are frequently present.

Microangiopathic anemia is characterized by early schizocytosis that often precedes the diagnosis of ARI, a reticulocytosis that is often less than 100,000 μl -1 , and

Moderate thrombocytopenia without other haemostasis disorder. Highly proteinuria is found rarely in thrombotic microangiopathy and is more suggestive of segmental and focal hyalosis. The histological involvement is most often mixed and severe and combines arteriolar and glomerular abnormalities. It is not uncommon for the histological signs to be present in the absence of stigmas of microangiopathic anemia. Treatment of HUS in HIV-infected patients involves plasma exchange with plasma. Sometimes corticosteroids, vincristine and splenectomy are offered with varying degrees of success.

Drug-induced IRA is common in this population. It is due to several mechanisms:

Trimethoprim-sulfamethoxazole potentiates the action of indinavir. The IRA, by intratubular crystal deposition, is favored by volume depletion, administration of a higher dosage than would be desired by glomerular filtration rate and acid-base balance disturbances.

Sulfonamides are weak acids that precipitate in acidic urine. The incidence of crystalluria in patients receiving sulfadiazine for toxoplasmosis or pneumocystosis ranges from 0.49 to 49%. Crystalluria is favored by the high doses administered and the hypoalbuminemia frequently observed in these patients which leads to an increase in the fraction of free plasma sulfadiazine and thus filtered by the glomerulus. Crysturia occurs on average on the 7th day of treatment. It results in an oligoanuric IRA and the presence of sulfadiazine crystals in the urinary sediment. Function recovery is observed when treatment is stopped. The occurrence of crystalluria imposes the suspension of the treatment, the alkalinization of the urine and the volemic expansion. The prescription of sulfadiazine in the HIV subject must be carried out by adapting the dosage to the renal function and ensuring water-soluble inputs and alkalinization to maintain a diuresis of the order of 150 ml h -1 .

Indinavir precipitates in alkaline urine. The functional symptomatology of indanavir-induced crystalluria is noisy, a type of urinary obstruction. This ARI affects the deeply immunocompromised patient; it is usually multifactorial in a febrile and dehydrated subject. It can be accompanied by hematuria. Crystals composed of indanavir and its metabolites are isolated in the urine. The recovery of renal function is the rule at the end of treatment, which can however be continued under the cover of good hydration.

The administration of aciclovir may be complicated by crystalluria, especially when the product is administered as a rapid bolus or at an excessive dose compared to the degree of glomerular filtration.

Urine sediment analysis usually shows hematuria and pyuria. The restoration of renal function is normally observed at the end of treatment and after rehydration. Hemodialysis can be proposed to purify aciclovir.

Compliance with dosages and the achievement of a volume expansion ensuring the maintenance of diuresis greater than 150 ml h -1 prevent this complication.

Immune reconstitution syndrome secondary to initiation of triple antiretroviral therapy may be a cause of ARI at a distance.

Due to the frequency of recurrent infections and exposure to nephrotoxic drugs, HIV-infected individuals frequently develop ARIs. The prevention of these ARIs involves the maintenance of satisfactory hydration and the adaptation of drug doses to the degree of glomerular filtration. The mortality associated with ARI is particularly high in cases of acute ischemic tubular necrosis, as observed outside the HIV pathology. The diversity of ARI etiologies and the possibility of specific treatments underline the importance of ACB in the management strategy of ARF in these patients.