Painful conditions of the elbow are divided into two groups, depending on whether an infringement of the periarticular structures (tendons, bursae, muscles) or the joint itself. In the latter case, arthropathy may be isolated or integrated in a context of polyarticular disease.

As for the shoulder, elbow pain usually recognize a periarticular origin, the most common of which is epicondylitis. 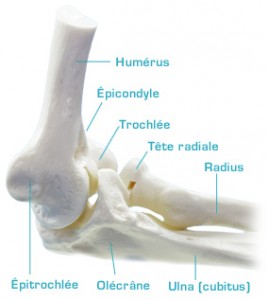 It alone accounts for over 90% of the chief complaints for elbow pain and represents a violation of the common tendon of insertion epicondylar the epicondyle muscles.

The pain is felt in the outer part of the elbow, radiating willingly to the anterolateral surface of the forearm, sometimes up hand.

It is initially triggered by the efforts and movements seeking the epicondyle muscles: pour a drink, handle a wrench or screwdriver, opening jars, etc. or make a forehand tennis (hence the term tennis elbow). Triggering actions become increasingly simple (shake hands), then the pain becomes permanent, sometimes exacerbated by the simple touch.

On physical examination, the pain woke up or increased by movement or upset extension of active wrist pronation.

It is mainly caused by the pressure at the outside of the elbow at the top or around the epicondyle.

To these findings are added two negative signs: the joint is not swollen and his mobility is normal. Furthermore, the comparative films of both elbows and side profile are normal.

Finally, the diagnosis is usually confirmed a posteriori by the effectiveness of (three) infiltration (s) cortisone (s) loco dolenti.

The treatment takes place in several stages depending on the size of tennis elbow.

In case of failure, seepage of injectable corticosteroids (not exceeding three) are found most often effective.

In the opposite case, daytime capital (also nocturnal even) by bending removable splint thermoformable material can be offered, for a maximum period of one month. A post-immobilisation rehabilitation is needed to restore normal joint mobility.

Finally, in case of failure of the immobilization of the elbow, surgical treatment can be exceptionally required.

Tendinitis insertion epitrochlear muscles (or golfer’s elbow) is the source of pain in the inside of the elbow, awake or exacerbated by the pressure of the medial epicondyle and the active flexion-pronation upset of the hand and wrist.

The bicipitales tricipitales tendinitis and elbow are exceptional and usually consecutive to violent stresses.

Olecranon bursitis serous or bursitis of the elbow:

The inflammation of the superficial bursa, located behind the olecranon, is in the appearance of a rounded and fluctuating swelling on the posterior aspect of the elbow.

Most often, this swelling is little or no pain on palpation, with no local inflammation. It appeared sponta neously or following unusual effort or a local trauma. Puncture, if carried out, removes a serous fluid, viscous, sterile and without microcrystals.

Sometimes bursitis is very painful to the reverse, with significant increase in local heat and general signs. It is then necessary to evoke an infectious or gouty bursitis, with highlighting of a seed or uric acid microcrystals in the aspirate.

The treatment of bursitis of the elbow of course depends on the etiology. Obviously in the case of a bacterial or gouty origin. Hygroma in the “mechanics” of subacute evolution, we must in fact avoid punctures and leaks, due to a significant risk of infection. Treatment consists of NSAIDs prescribed for long periods, and particularly the eviction of local trauma (not lean). The evolution is usually favorable, surgical removal of the hygroma being exceptional.

Other extra-articular affections of the elbow:

Ultimately, it can be bulky and limited elbow flexion.

The ossifying paraostéoarthropathies may be observed in patients with prolonged coma in intensive care. They are the source of often bilateral ankylosis of the elbows, linked to the existence of extensive periarticular ossification, without achieving the joint itself.

The pathogenesis is unknown.

Like any joint, the elbow may be the seat of a mechanical or inflammatory appearance of pathology.

Osteoarthritis of the elbow is rare, almost always original posttraumatic (fall on the elbow, dislocation, fracture) or microtrauma (jackhammer).

It is revealed by moderate pain with movement, limiting the range of motion in flexion and / or extension or paresthesias in the ulnar nerve territory.

The shots elbow, face and especially profile, show the usual signs of osteoarthritis: narrowing of the joint space, subchondral sclerosis and osteophytes sub-humérocubitale.

The septic monoarthritis of the elbow, pyogenic or tuberculous, is exceptional.

The elbow may be concerned during acute gout, but the diagnosis is obvious because this location is never inaugural (first gout always concerns an articulation of the lower limb) and thus fits in a context of gout old, known and polyarticular. In chronic gout tophaceous the elbow extension face is a privileged development of tophi, diagnosis asking again no problem.

Arthritis of the elbow can occur in the evolution of any chronic inflammatory disease, but is exceptionally inaugural and isolated. 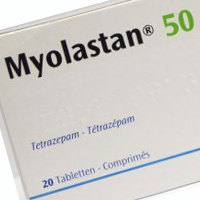