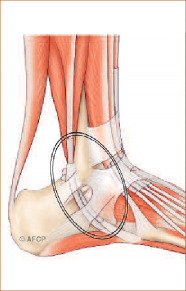 Tendon of the fibular short in normal subjects: MRI aspect and relationship with longitudinal cracks:

• no history of ankle trauma;

The configuration and topography of the tendons were studied in the different positions of the ankle.

Twelve times the tendon of the short fibular was found in front or in an antero-internal position with respect to the tendon of the long fibular. Modifications of the form were observed: in plantar flexion tendon moderately flattened but less pronounced than in dorsiflexion.

There are fatty planes between the tendon of the short fibrillar and the posterior border of the fibula as well as between the two tendons.

In complete dorsal flexion the tendon of the short fibular rolls more forward and inward; it becomes flatter and fine and rests against the distal portion of the fibula. The tendon of the long fibula presses against it like the intermediate fatty planes. The two tendons are difficult to distinguish between themselves and the cortical fibula.

In all patients, the short fibular muscle extended more distally in the retrofibular gutter during dorsiflexion.

The description of the increased flattening of the tendon of the fibular short during the dorsiflexion of the ankle makes credible the theory that the fissure syndrome of this same tendon is secondary to compression by the tendon of the long fibular. Lowering the short fibular muscle also helps to flatten the tendon.

The greater stretching of the tendon and its path with more pronounced angulation in dorsiflexion could also contribute to its flattening.

The tendon of the fibular short, being caught in a “ sandwich “ , is subjected to friction. The central part which undergoes the most stresses, weakens, thins while the medial and lateral part of the tendon curl around the tendon of the long fibular, taking the form of a “ C “ .

Population: all patients who had surgery on one of the fibular tendons (long or short), evaluated at more than one year of intervention (22.2 months on average).

Use of the American Orthopedic Foot and Ankle Society (AOFAS) in pre- and postoperative.

Post-operative care: plaster boots or splints without support for two to three weeks (a little longer if tenodesis), then removable walking boot for three to five weeks, then wearing a lace-up ankle for six weeks to three months.Rehabilitation was started at three weeks of the procedure, first with joint mobilization work and then intensification of the exercises starting at six weeks.

The authorization to resume the sport was given when the perimeter of the calf was not more than 5 mm different from the preoperative measurement and the mobility of the ankle did not present a deficit of more than 5 ◦ compared to the evaluation presurgical.

Eighteen cases of tendon tearing of the long fibular, of which 11 were isolated; preoperative AOFAS score of 51.9 Å} versus 90.6 Å} 10.9 postoperatively (significant).

Most tears were longitudinal (36).

Five patients (two of whom had villonodular synovitis) had a complete rupture of one or both tendons.

The average time to resume activity was 3.49 weeks.

There were no differences in outcomes by gender.

A few surgical procedures were performed: eight repairs of the lateral collateral ligament of the ankle, a repair of calcaneal tendonocalcinosis, four excisions of the peroneal bone, 13 repairs of the retinaculum, six exostectomies.

There were 11 tenodeses; the mean age of these patients was statistically higher than the overall group (51.7Å} 9.2 years). Postoperatively, the AOFAS score did not differ from the rest of the group.

No differences were noted in the age and activity level between patients with isolated lesions of one of the two tendons or a combined lesion.

Resumption of activities: two athletes out of 16 could not regain their previous level. Six patients decreased their activity level; three have retained ankle instability.

Since athletes’ desires and motivations vary widely, the level of recovery does not seem to be a reliable means of evaluating the results. The surgical gesture associated in 20% of the lateral collateral ligament may interfere with the results.

J. Zammit, D. Singh The peroneus quartus muscle. Anatomy and clinical relevance. J Bone Joint Surg 2003; 85 (B): 1134-7 Peroneus quartus is one of the accessory muscles of the fibula. It was first described by Otto in 1816 and further studied by Hecker in 1923 which estimated its incidence at 13% in the general population.

To evaluate the incidence, the anatomical variations, the possible pathologies related to this muscle.

Dissection of 102 cadaveric legs and review of 80 MRIs performed between 1997 and 1999 for pain and / or deformations of the ankle.

• three were from the short fibular muscle, two from the fibular malleolus and one from the distal fibers of the long fibular (differentiated tendons);

• three were placed on the retrotrochlear eminence of the calcaneus, two on the base of the fifth metatarsal and one on the cuboid;

• a case of bilateral peroneus quartus originating from the short fibular muscle and inserting at the base of the fifth metatarsal.

MRI study: six peroneus quartus were identified; their origin could not be identified; the distal insertion was localized in five cases at the level of the retrocochlear eminence of the calcaneus. Four of the six patients had pathology of the ankle lateral compartment.

Different proximal origins and distal insertions have been identified but are only variants of the same muscle.

The search for a peroneus quartus should be systematic, not only because it can be responsible for a number of pathologies but as a potential tool for surgical action; thus, Myck and Lynch in 1987 used peroneus quartus to reconstruct the retromalleolar gutter and stabilize the unstable fibular tendons.

M. Dombek, L. Lamm, K. Saltrick Peroneal tendon tears: a retrospective review. Foot Ankle Surg 2003; 42: 250-258 Meyer, anatomist, was the first to report a case of cracking of the short fibular tendon in 1924. He had noticed the absence of a repair process. Since this first description, numerous articles have been devoted to this lesion as well as that of the tendon of the long fibular.

The circumstances of discovery are varied: traumatic context or not. The clinic is not stereotyped; pain on the external face of the ankle, heat, swelling, sensitivity to the lateral retromalleolar gutter, with or without weakness during fibular muscle testing.

Identify a typical patient profile, discover the mechanism of injury, analyze therapeutic modalities, and evaluate the prevalence of post-therapeutic complications.

• analysis of epidemiological and clinical data;

Census of complications: minor (not requiring surgery) or major (requiring prolonged treatment or even new intervention).

Evaluation of the resumption of activities:

Various surgical gestures: excision of supernumerary muscles or insertion with too low insertion; excision of the inflammatory tissue of the synovium; repair of the longitudinal tendon fissure and tubulization; debridement of thickened tendons; tenodesis of small tendons; cure of any ligamentous laxity; repair of the retinaculum with or without digging of the retrofibular gutter.

Only 58% of patients had traumatic ankle histories. The time to surgery was on average 25.7 weeks (0-156). On average, 2.2 different treatments were tried before the patients were operated.

• 5% of snaps in the fibular tendon region.

• 23% pain in palpation of the lateral collateral ligament;

• 13% had only fibular tendon repair;

• 20% of patients had intraoperative tendon subluxation: all had a superior retinaculum repair, 10% had a retrofibular gutter plasty;

• 33% of patients had resection of the short fibular muscle located too low in the gutter;

Follow-up over 13 months: 20% of minor complications were noted: transient nerve irritation sural, resolutive tendinopathy, asymptomatic subluxation of the fibular tendons. There were 10% of major complications: hematoma, cicatricial dehiscence, non-resolving tendinopathy, ankle instability. Only one patient out of 40 kept pain on exertion.

In the study, 3.3 preoperative diagnoses were made before the correct diagnosis was made; which shows a certain underestimation of this lesion.

The subluxation of intra-operative fibular tendons varies from one study to another; which can be explained by the subjective nature of its assessment.

A systematic assessment of the lateral collateral ligament should be made due to the frequency of the lesional association.

Any additional element present in the retrofibular gutter (supernumerary muscle, muscle leader too low, peroneus quartus) is a source of compression and must be excised.

If the posterior border of the fibula proves too prominent; it must be resected.

The associated non-rare involvement of the two fibular tendons justifies their systematic study in intraoperative.

For a retrospective study, some data are missing: subjective assessment questionnaire, preoperative dynamic ankle shots worth evaluating in a future study.

Management of concomitant tears of the tendon of the short and the long fibular:

Report the experience in treating concomitant tears of both fibular tendons and suggest a therapeutic algorythm.

Between 1990 and 2000, of the 73 patients treated for fibular short tendon injury, 28 had an associated lesion of the long fibular tendon:

• average duration of symptoms prior to management: 4.9 years;

• MRI in 23 cases: in spite of the imaging, the precise lesional balance could only be established intraoperatively;

◦ if both tendons are roughly preserved, standard repair by excising the longitudinal fissure and tubularizing the remaining tendon,

◦ if one tendon is irreparable but the other is considered functional, realization of a proximal tenodesis according to the state of the muscle,

◦ if the other tendon is not functional, tendon graft or transfer.

• in the case of instability of the ankle confirmed on dynamic images, correction if varus from the back by calcaneal osteotomy;

• in case of tendon subluxation without instability, digging of the fibular gutter;

• in the case of tendon subluxation associated with instability, ligament reconstruction using the tendon of the short fibular, digging of the gutter, maintenance of the tendon reduction by the posterior flap of the fissured tendon;

Postoperative protocol: articulated boot for six to eight weeks or even 12, depending on the patient’s gesture or compliance, locked to limit plantar flexion at 20 ◦ ; no dorsal flexion, because tension of the tendon repaired. In case of immobilisation of six weeks, relay by an orthesis preserved six weeks.

• pain and swelling of the ankle in all cases;

• 43% (12) of patients complained of instability, confirmed eight times by clinic and imaging;

• painful palpation was not always localized on the tear zone;

• the strength of the fibular tissue was reduced overall, but difficult to quantify because of accompanying pain;

• Six patients had a hollow-varus foot;

• MRI, compared to intraoperative findings, proved insufficient to correctly evaluate the lesions, underestimating their extent, particularly with regard to the tendon of the long fibular.

• 50% of patients complained of residual pain but less intense and only during efforts;

• all patients were able to resume their sporting activities;

In the published series, the chronology of the occurrence of tendon lesions is not always very clear.

Assessment of the sensitivity of MRI varies from study to study.

In the presence of a lesion of the fibular tendons, the search for favorable local factors (varus of the posterior foot, ankle laxity) must be systematic in order to adapt the surgical procedure.