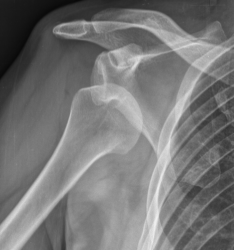 Should a recent shoulder dislocation of the shoulder be immobilized in external rotation?

The anterior lower stabilizing anatomical structures are relaxed when the arm is in internal adduction. This may favor the displacement of a fragment of post-traumatic origin of the labrum.

Quantify the effect of external rotation on a Bankart lesion through a cadaveric study.

Study of ten corpses. Creation of a Bankart lesion.

The contact force between the labrum and the glenoid was measured continuously while the humeral rotation varied from 60 ◦ of internal rotation to 45 ◦ of external rotation.

No contact force was detected when the arm was in external rotation. In neutral rotation, this force appeared in six cases out of ten; the latter increased crescendo as the external rotation increased. The intensity of the force decreased over repetitions.

The study shows the value of immobilization in external rotation. In this position, the anterior structures are tensioned in contrast to the internal rotation.

Moreover, the existence of a post-lesional hematoma contributes to the distension of the anterior capsuloligamentary structures.

The use of cadavers removes any potential dynamic factor. In addition, the artificially created Bankart lesion is isolated whereas in vivo, there are often associated capsular lesions.

External rotation could influence the healing of a Bankart lesion, thereby reducing the risk of recurrence.

Purpose of the review:

Provide answers to three questions: Is post-luxation immobilization useful? If yes, for how long? Does the immobilization position play a role in the evolution?

Review of English literature until 2005.

Interest of the asset?

◦ Kralinger: n = 241; comparison between three weeks of capital asset versus no capital asset; no difference noted on the recurrence rate; reserve: the distribution between the two groups was not equitable (91% immobilized),

◦ Marans compares six weeks versus four weeks versus no immobilization; follow-up over 15 years revealed recurrences in the three groups,

◦ Henry compares 62 subjects immobilized against 59 without immobilization; 90 and 85% respectively of recurrences were observed,

For this author, subjects over 40 years old must be mobilized early. The duration of immobilization had no influence on the rate of recidivism, unlike the age (95% of the adolescents had re-offended);

◦ Rowe and Sakellarides assessed the influence of immobilization in 324 primoluxations.

Immobilization seems to reduce the recidivism rate but not the duration of the recurrence (?),

◦ Rowe, in a previous study had studied 275 dislocations, operated or not. The incidence of recurrence was lower in patients who had been immobilized for three weeks but did not decrease if immobilization was prolonged.

• Lill, having studied different immobilization times (one to six weeks), did not find any difference in the recidivism rate between immobilized patients two or more weeks. Young age and the practice of a restrictive sports activity seem to be determinant prognostic factors;

• Simonet and Cofield, (n = 124) who had stopped for one and up to six weeks, did not show any difference in the recidivism rate. Curiously, patients who were most immobilized were those who showed the most reluctance to resume a sporting activity. The age of onset was decisive for evolution;

• Hovelius (n = 257), varying the immobilization from one day to four weeks, also did not influence the rate of recurrence;

• Kiviluoto compares one week versus three weeks of downtime; at one year of decline, the recidivism rate is lower in the case of long immobilisation. The same observation was made by the other authors concerning the influence of age and the practice of sport on evolution;

• Maeda studied 79 young rugby players suffering from shoulder primoluxation. At one year, he found 89% of recidivism in the immobilized group less than three weeks versus 69% for those immobilized between four and seven weeks (significant difference).

Influence of the immobilization position?

• Itoï (2001) studied six first and 13 recurrent dislocations in MRI, arm in adduction, varying the rotation; in external rotation, there is less separation and displacement of the labrum than in internal rotation. Moreover, the capsular detachment is less. There is no difference noted according to whether it is the first episode or a recurrence of dislocation;

• Ishikawa compares the wearing of a clavicular harness versus a conventional immobilization of the shoulder. At one year, no recurrence was observed in the harness group versus 29% in the conventional group.

The review of the literature is limited in its conclusions by the sample size, the methodological biases.

New studies are needed to decide on the interest and modalities of immobilization in shoulder primoluxations.

The immobilization in external rotation of a dislocation of the shoulder reduces the risk of recurrence:

The Bankart lesion found in 94 to 97% of the dislocations of the shoulder would have a potential for scarring. This is based on two major arguments:

• on the other hand, in the case of recurrence, the latter ceases spontaneously in 20% of cases.

The risk of re-offending does not depend on the duration of the asset or the type of asset, probably because the Bankart injury is not reduced with traditional assets.

Validate the hypothesis that an immobilization in external rotation decreases the rate of recurrence.

Randomized study comparing immobilization of the shoulder with internal rotation versus external rotation of 10 </s>.The dislocation was less than three days old. One hundred and ninety-eight patients were recruited, with an average age of 37 years. The immobilization was carried continuously except at the time of the toilet for a total duration of three weeks, followed by a motorization. Intense sports were banned for three months. Patients were reviewed at six, 12 and 24 months or contacted by telephone in case of impediment. The recurrence rate was calculated.

One hundred and fifty-nine patients could be followed for at least two years (mean 25.6 months): 38% of the internal group and 45% of the external group could be re-examined.

The results of the study suggest that immobilization in external rotation of 10 ◦ placed on the first day of reduction reduces the risk of recurrence, including in young subjects.

Hart and Kelly were able to observe in arthroscopy that the best position to reduce the lesion of Bankart was the arm with 30 ◦ abduction and 60 ◦ of external rotation.

The total duration of the asset must be determined.

It was three weeks in the study but other recent studies suggest four weeks and then two weeks in internal rotation.

There are three possible biases in the study: imperfect compliance, evaluation in the assessment of recurrence and not instabilities, duration of the study objective

The two rigid splints were to be fixed at 30 ◦ RE (angle assessed by photographic locating).

• performing a number of similar daily activities to compare functionality among users (applying toothpaste, putting on trousers, opening a letter, climbing and descending a staircase, using the computer, making jumps); prohibition of touching the splint or using the other limb to perform certain tasks;

• Assessment of the possibilities of resettlement of the splint by the patient;

As expected, rigid splints allow for greater ER and the wallets are more comfortable.

Weaknesses of the study:

Instead of being carried over 24 hours as assumed by the pathology, each system was only maintained for 15 to 20 minutes during which activities were performed, which underestimates the assessment of the splint.

Moreover, according to statistical calculations, it would have taken 15 more patients to be able to validate the results.

Follow-up in MRI of early sequences of glenohumeral dislocations immobilized in external rotation.

Assessment in both positions of the volume of hemarthrosis, labral lesions.

Hemarthrosis was found in 23 patients; for 17 of them, external rotation displaced haemarthrosis in the posterior region of the shoulder.

Twenty-two labral lesions were able to be objectified.

All those with separation were reduced to external rotation, five of them complete.

The anterior capsular pocket was constantly reduced during external rotation except for two patients.

External rotation of the arm would result in tensioning the subscapular muscle, promoting contact between the capsule and the bone structures and the contact between the labrum and the glenoid. Medium-term studies show the influence of the immobilization mode on the recurrence rate (38% in the 25-month Itoï study).

The exact details of this method of immobilization remain to be specified: duration? External rotation? Compliance?

Post-reduction management of anterior dislocation of the shoulder:

The incidence of shoulder dislocations in the United States is 8/100 000 inhabitants per year. In 2004, a survey of members of the British Trauma Society revealed that 94% of practitioners immobilized their patients in internal rotation.Nevertheless, the recurrence rate of dislocations is 20-50%, and even up to 64% in patients under 30 years of age.The role of downtime is not clearly established.

The lesions of the labrum and the lower glenohumeral ligament are the main evolutionary predictive factors.

Review of the bibliography on immobilization positions in glenohumeral dislocations.

Seybold D, Surgery 2006: n = 10; primoluxation; average age of 30.4 years; immobilization in external rotation from 10 to 20 ◦ for three weeks; assessment of patients at six and 12 months of age; an MRI done at six weeks post-dislocation showed a repositioning of the Bankart lesion; at 12 months, the Constant score was 96.1 points, the Rowe score of 91.5 points. One patient had a recurrence at eight months.

Hovelius L, J Bone J Surg 2008: a multicenter, randomized Swedish study of a cohort of 255 patients who had an initial stricture between 1978 and 1979: immobilized elbow to body for 3-4 weeks (group 1) analgesic target until disappearance of the pain, or even total absence of immobilization (group 2); 25-year follow-up with 229 questionnaires sent back by patients and exploitable: except for the presence of a trochitis fracture which seems to be a definite prognostic factor for recurrence, the recurrence rate was as follows: group 1: 52%, group 2 : 54%, not significant difference.

Kivilueto O, Acta Orthop Scand 1980: prospective study of a cohort followed for one year, divided into two groups according to age (less than or more than 50 years):

• in the “ young ” group (n = 96), immobilization in internal rotation (unspecified randomization method) for one week or three weeks in a Gilchrist type device. The difference between the recidivism rate (26% and 17%) was statistically insignificant. A subgroup was formed with subjects under 30 years of age (n = 53), with a recidivism rate of 56% in the case of one week immobilization versus 22% for those immobilized for three weeks (p <0.5 ).

• for subjects of “ more wall ” age (n = 127), immobilization was done in internal rotation for one week. The recidivism rate in this group was 8%.

There appears to be anatomical evidence showing the value of external rotation immobilization in shoulder primoluxation to reduce the risk of residual lesion (Bankart …) influencing the recurrence rate.

However, clinical studies are still lacking to:

• to confirm this “ protective “ role (the contradictory results of Itoï and Finestone: JBJS 2009);

• to appreciate patients’ compliance with this mode of immobilization, much less functional in everyday life than the classic “ elbow to body “ ;

• specify the exact modalities: what is the most effective degree of rotation? How long does it take?