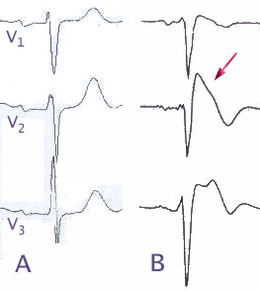 The heterogeneity of repolarization of the action potential between the epicardium and the endocardium explains both the ECG aspect and the rhythm disorders.

The distribution of Ito is also different between heart regions, more important in right ventricular myocytes (VD) than in left ventricular (LV).

In the case of Br, the functional abnormality of the sodium channels leads to a relative over-activation (absence of inactivation) of the Ito potassium repolarizing currents, leading to a loss of the dome of the epicardial cells and an increase in the transmural current gradient between epicardium and endocardium, which in turn leads to ST segment elevation. The preferential distribution of Ito in the VD epicardium explains the presence of ECG abnormalities only in the right derivatives.

If epicardial repolarization precedes endocardial repolarization, the T wave will remain positive and give the appearance in the saddle. A greater emphasis of this phenomenon will be accompanied by an extension of the AP, so that the transmural gradient will reverse and lead to the development of the aspect of type 1. If the disturbance is even greater, found a total loss of the dome of the AP, resulting in an aggravation of the epicardial and transmural dispersion of the repolarization. This aggravation can lead to ideal conditions for a rhythm disorder, by phase II re-entry (extrasystole and ventricular fibrillation).

The typical early repolarization syndrome is also related to depression of the epicardial PA, resulting in a gradient of current between epicardium and endocardium, itself leading to the elevation of the point J.

Acetylcholine (secondary to vagal hypertension related to training) will depress the plateau phase of the AP in the epicardium of the LV and not in the endocardium, causing a current gradient and the appearance of elevation of the ST segment. The current Ito being little represented in the epicardium of the LV, the arrhythmogenic risk is therefore almost zero. This aspect is reversible under atropine. Although acetylcholine alone is capable of causing PA dome loss in vitro on ventricular epicardial tissue, it is not capable, in vivo, of causing phase II re-entry. This explains why Early Repolarization Syndrome is not in itself associated with a risk of sudden death.

Although sudden death of Br occurs primarily during rest and during sleep, physical activity is not always harmless.There have been several favorable circumstances described, some of which may be encountered during sport practice.

The dysfunction of the sodium channels found in the Br is sometimes thermosensitive.

The occurrence of Br abnormal ECG abnormalities or severe ventricular rhythm disorders has been reported during hyperthermia, in patients without a personal or family history and without ECG abnormalities. At a distance from febrile episodes, ECGs were normal, changing inconstantly during pharmacological tests (flécaine or ajmaline test). Under normal conditions, physical exertion increases the body temperature in proportion to the intensity of the exercise. This increased susceptibility of sodium channels to temperature predisposes Br carriers to arrhythmias during febrile conditions or during intense physical exertion.

Changes in serum potassium are described during or during exercise. These disturbances are insufficient to produce arrhythmias on a healthy heart. However, they were incriminated during sudden death during exercise in athletes with structural heart disease.

In Br, it has been described the appearance of rhythm disorders, favored by hypokalemia in initially asymptomatic subjects and without there being prolongation of the QT space.

The only information known is cocaine, a high dose, responsible for electrical aspects of Br and potentially responsible for ventricular arrhythmias. Cocaine is one of the substances used alone or in combination in doping (Belgian pot for example).

One can also imagine the deleterious effect of the steroids via hypokalemia in the carriers of Br.

Excess insulin results in a dispersion of QT in humans and increases the repolarization disorders of subjects with long QT.

Strenuous and violent exercise can trigger an overproduction of glucose from the liver, with paradoxical hyperglycemia.

Role of the autonomic nervous system:

There is an important role of the autonomic nervous system in the determinism of ventricular arrhythmias, including in Br syndrome.

Malignant ventricular rhythm disorders occur at rest or during the night and not during exercise.

This has been very well demonstrated by the analysis of rhythmic events in patients with implantable automatic defibrillator (ICD), which confirms the importance of vagal tone in the determinism of sudden death.

On the contrary, stimulation of the sympathetic system and exposure to catecholamines, as in sports, would have a protective effect on the arrhythmogenic mechanisms of Br syndrome.

By way of example, isoproterenol, by normalizing the epicardial AP dome, normalizes ST-segment elevation and is used to treat rhythmic storms in Br syndrome. Effort itself may reduce the risk of sudden death.

However, the chronic adaptation of the autonomic nervous system related to training (increased vagal activity and / or decreased sympathetic activity) also explains the exaggerated reactions to vagal stimulation, such as the occurrence of syncope in post-exertion . It could also explain the potential risk for a person with Br syndrome to experience rhythmic accidents during sleep or immediately after exercise.

These sports-related factors aggravate the dysfunction of the autonomic nervous system, evoked by some authors and demonstrated during MIBG scintigraphies, carried out in patients with Br syndrome. A regional hypofixation, in the posterior wall of the ventricle left, was found in 47% of patients (8/17), but in none of the control subjects. This result is surely due to sympathetic denervation. 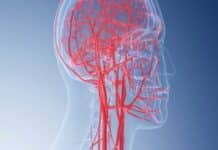