Macronutrient 2 leme cation (after K) intracellular (the most abundant in cells), 20% of the Mg is in the bone. 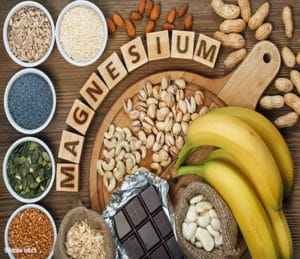 Catalyst of 400 fundamental biochemical reactions and catalyst of all the reactions which make it possible to pass calories to energy (ATP), in particular all the phosphorylations.

=> Mg is a universal preservative, which explains why its deficit is a factor in disturbances and pathologies of all kinds.

The HLA B35 tissue group (18% population) has poorer cellular retention of Mg and is therefore more sensitive and more vulnerable to stress and its cardiovascular manifestations.

There are 6 known recaptors of Mg

It is a major factor 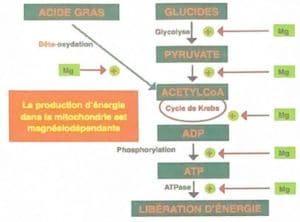 c) Can restore fertility in women (most often related to fatigue)

a) Magnesium is the physiological calcium channel blocker, but Ca is the second messenger of noradrenaline. There is a mechanism of intracellular antagonism between Ca and Mg. 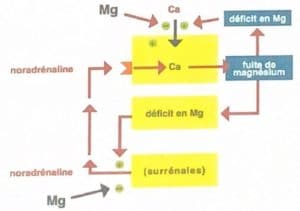 b) Modulates cerebral norepinephrine, noradrenergic neurons linked to anxiety, hypervigilance, are overactivated in the event of magnesium drop

b) Reduces the activation of white blood cells

5) Antitoxic roles by opposing the cellular penetration of heavy metals: Hg, Pb, Cd… (including through the placenta)

a) antihistamine on both routes: allergic IgE route and non-allergic route (bradvkinin)

b) Mg is a modulator of mast cell degranulation, mediated by calcium The allergist Favennec has discovered that Mg is able to prevent the degranulation of mast cells (which secrete histamine)

b) lower triglycerides and overall improvement in lipid profile, including increased HDL cholesterol

c) increases the utilization and transport of glucose (ATP)

g) protector of myocardial cells against ischemia which leads to cell death if there is no longer enough oxygen, glucose, ATP. In this case, the calcium massively enters the cells of the myocardium which is “dizzy”. This state remains reversible thanks to magnesium, otherwise there is necrosis. Therefore, we recommend the injection of Mg during an infarction as soon as possible.

8) Mg is necessary for the prevention and treatment of overweight:

The more a person is deficient in magnesium, the more they are tired and vulnerable to stress Fatigue and stress contribute to increasing calorie intake. However, calories cannot be converted into ATP if magnesium is lacking. Glucose and fatty acids circulate, form triglycerides, which enter fatty tissue.

=> Magnesian inputs are inversely correlated with

9) Mg is needed in the treatment of diabetes:

You cannot treat diabetes without Mg because:

Mg contributes to each stage of the transformation of glucose into ATP, the more it is transformed, the less there is in the blood, which causes an osmotic call of glucose from the blood to the interior of the cells. glucose by osmosis with the help of magnesium phosphorylation of insulin receptors which can only be done thanks to magnesium is necessary for them to be active

diabetics are more deeply deficient in magnesium than non-diabetics

Magnesium is needed to prevent excess calcium from getting into cells and being deposited in soft tissue and for it to go into bone tissue, and it helps reduce inflammation that plays a role in oxidation of bone tissue and its destruction.

11) Magnesium activates B vitamins by phosphorylation:

and reduces pain on average by 30% (all pain: post trauma, inflammatory, cancerous, etc.) • It is therefore used as a complementary treatment for anesthesia and perioperatively Pain is present in many situations It can be linked to intense muscular effort, to fatigue, whether acute or chronic, as in fibromyalgia, to musculoskeletal disorders (headaches, neck, back pain, etc.), trauma, inflammation or tumor processes, etc….

Sota Omoigui et al, The biochemical origin of pain – proposing a new law of pain the origin of all pain is Inflammation and the inflammatory response – a unifying law of pain, Med Hypotheses, 2007, 69 (1): 70-82

13) Magnesium is overused by hyperestrogenia:

Fachinetti has shown that in the second period of the cycle, the rise in estrogen causes a depression of magnesium, which contributes to PMS (water retention and anxiety).

The hyperestrogenia associated with endometriosis can therefore contribute to the increase in pain.

The situation where estrogen rises the most is pregnancy. Taking magnesium from the start of pregnancy greatly reduces premature births, improves growth in utero, improves the Apgar score at birth, reduces the risk of eclampsia and pregnancy-induced diabetes.

Magnesium is a major neuroprotector because it participates in:

Note: Nutritional and behavioral modulators of the NMDA receptor are:

promotes the synthesis of serotonin and melatonin (derived from serotonin), which play essential roles in the quality of sleep

Signs and symptoms of magnesium deficiency:

The nutritional deficit in magnesium, amplified or not by a predisposition to hyperexcitability (HLA B35), results in:

Risks of Mg Deficiency During Pregnancy :

Under the effect of stress, calcium enters the cells massively and flushes out magnesium. As this is vital for cells, they have at least 6 reuptake systems. The endocrinologist Jean

Taurine spares magnesium and magnesium spares taurine. As a result, they are systematically combined in supplements. Especially since taurine has synergistic effects, independent of magnesium as a sedative neurotransmitter, antiepileptic, anti-water retention, antiarrhythmic, antioxidant, anti-inflammatory, antitoxic … Taurine has been shown to protect most organs, including heart and brain.

Another amino acid, arginine contributes with magnesium to reduce the rise of cortisol, to protect mitochondria, energy plants, to increase nitric oxide, vasodilator …

is also systematically integrated into a magnesium complex because it is poorly supplied in more than 90% of the population overused by stress, inflammation, estrogen, and because it contributes with magnesium to the synthesis of sedative neurotransmitters: serotonin, GABA and taurine.

The absorption of magnesium is not inhibited by calcium unless disproportionate amounts are used.

=> Proton pump inhibitors cause hypomagnesemia which can be fatal. Many people taking this medication outside of the indications or for periods longer than those indicated (75%). The negative consequences of hypomagnesemia is a factor in increasing digestive inflammation, hyperacidity => this increases the problem

Urinary Mq losses are favored by:

There are 3 generations of magnesium salts:

PRECAUTIONS FOR USE and Cl 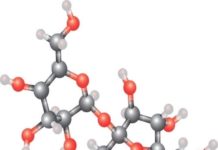