Carbohydrates, commonly called “sugars”, are an essential source of energy for the body. They can be used directly by the body or stored either in the form of glycogen in the muscles and the liver (where they constitute easily mobilized reserves), or in the form of triglycerides in adipose tissue. 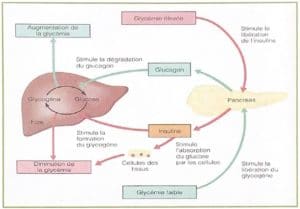 Carbohydrates can be composed of glucose, but also of fructose, maltose, galactose (in lactose)… and the length of their chain can be very variable.

The oses are simple sugars, in a way “micro-fatty acids”. Most of the important doses in biochemistry and human nutrition are 6 carbon. They are hexoses, like

Some proteins have carbohydrate parts, the glycoproteins present in 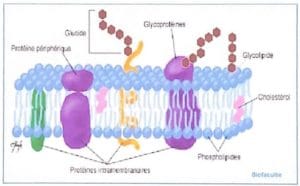 Lipopolysaccharides (LPS) serve as antigens, are an integral part of the HLA system of histocompatibility and in blood groups. When they are of bacterial origin they can be violently pro-inflammatory (endotoxins).

Cerebrosides are major components of white matter, gray matter and myelin. There is also some in the skin.

We find oses in nucleotides: deoxyribose is integrated into DNA and ribose into RNA.

For a long time, it was believed that short-chain carbohydrates were the so-called “fast” sugars and that long-chain carbohydrates were the so-called “slow” carbohydrates. This is why bread, industrial breakfast cereals and potatoes have long had this reputation as “slow sugars”. Today, we know that this classification is totally wrong. Fluffy white bread, rich in starch, is a quick sugar. It is ventilated, digested quickly and releases its energy very quickly into the blood, which promotes pumping, temperamental instability, weight gain and also increases the risk of type 2 diabetes in the longer term. White bread, mashed potatoes, well-cooked vermicelli, rice pudding… are therefore “slow fake sugars”.

On the other hand, semi-wholemeal or wholemeal breads, al dente pasta, undercooked risotto rice … richer in fiber and denser are real slow carbohydrates.

The glycemic index (GI) makes it possible to estimate the impact of the sugars released by food on the blood glucose level (glycemia). Two foods containing the same amount of carbohydrate can therefore have completely different effects on our blood sugar. Foods with a high glycemic index will cause blood sugar levels to rise quickly and sharply. We will talk about fast carbohydrates. Those with a low GI will make it rise slowly and weakly. We will then speak of slow carbohydrates.

Why do foods with a high glycemic index make you fat?

When we ingest carbohydrates, they are digested (cut into small pieces) and released as monosaccharides (most often glucose). This glucose will end up in our blood and therefore raise our blood sugar. In order to allow the use of this glucose by our cells (as fuel) and cause the formation of glycogen in the liver, the pancreas will release a hormone, insulin, which will lower our blood sugar. During a large consumption of hyperglycemic foods, the amount of insulin released will also be large and the sugar will no longer be converted into glycogen, but into triglycerides, that is to say into fat to be stored. This is all the more so since insulin causes triglycerides to enter the adipose tissue massively.The insulin released in excessive quantity will therefore cause an increase in fat mass.

In addition, glucose sticks to proteins and inhibits them. It is the glycation which will slow down all the enzymes, for example those which are used to make ATP. However, glucose not transformed into ATP will also be transformed into triglycerides to be stored instead of being spent on useful energy.

Finally, fast carbohydrates unbalance the flora of the colon in favor of bacteria which stimulate the appetite, increase the energy catabolism of cellulose and have a pro-inflammatory effect which causes overweight to progress to its complications (glucose intolerance and cardiovascular pathologies).

Its calculation is very simple. Just multiply the GI by the amount of carbohydrate in the portion of food you usually eat and divide it by 100.

There aren’t many examples of foods with a high glycemic index and low glycemic load, however, as there is with watermelon. Also, while this notion of GI has been criticized, it seems today that it remains an indicator as reliable as the CG for classifying carbohydrates. The GI and the CG are therefore often correlated, although there are some exceptions it is true.

Here are some examples of foods with a high CG: fries, Big Mac or Giant hamburgers, crisps, colas, processed breakfast cereals such as Corn Flakes (and all those chocolatey ones that are even worse), pizzas, etc.

More recently, these concepts have been supplemented by that of the insulin index (II). We are no longer talking here about the ability to raise blood sugar but rather about the secretion of insulin which follows the ingestion of food.

A chronically too high insulin promotes acne, overweight, inflammation (and therefore cancer, cardiovascular disease,) and type 2 diabetes. The benchmark II is that of white bread. It is 100.

For many foods, PIG and PII are correlated. Thus the sweets have very high GI and II. But it seems that some foods can have a low GI but a high II. This is the case, for example, with certain dairy products containing whey, such as yogurts and fresh cheeses. A yogurt has for example a GI of 62 but an II of 115 (more than white bread and equivalent to a chocolate bar!). Adding milk, even in normal quantity (a small glass of 200 ml) to a food, also increases the insulin index (and not glycemic) of the ingested food.

This is because insulin is not only released after a meal rich in carbohydrates. Researchers have found that the association of certain amino acids (constituents of proteins) with carbohydrates promotes the release of insulin twice as important as the same amount of carbohydrates consumed alone. Today, few foods have been the subject of an insulin index calculation, but note that white bread has an II of 100, and sweets such as chocolate bars or candies can go up to 160!

To lower the glycemic index:

What are the benefits of a low glycemic and low insulin stimulating diet?

Focus on some carbohydrates:

Glucose is obviously essential for survival, as it is the

main fuel for cells, and practically the only fuel for the brain

its level in the blood which:

This glycation is amplified in diabetes with all the consequences that we know: lack of energy, vulnerability to infections, early cardiovascular pathologies, premature cognitive decline, accelerated aging.

Drugs on our plates:

Fructose is a monosaccharide with a very low glycemic index, which (wrongly) earns it a very good reputation. Consumed reasonably and in natural form via fruits, it does not of course present any health problem. But it is also very present in the agave syrup which has such good press (and in the USA in industrial products in the form of corn syrups enriched in fructose). However, studies show that taking added fructose opens the appetite, promotes weight gain, glycation, insulin resistance and metabolic syndrome …

In practice, fructose in fruits is associated with fiber and protective nutrients.

Except in overweight, diabetes and hypertriglyceridemia where you should not abuse some fruits very rich in fructose such as dates, dried figs, grapes, there is no problem to consume fruits even in quantities.

> On the other hand:

are unacceptable to overweight people, diabetics and people with hypertriglyceridemia and should only be used in small doses by others.

On the other hand, higher doses of fructose just after prolonged exercise facilitate the hepatic glycogen recharge of athletes.

Lactose intolerance would concern 10 to 30% of European and North American populations, 75% on average in the world. If lactose is poorly digested (due to lack of lactase), it can be a source of digestive disorders bloating, diarrhea, abdominal pain, abdominal cramps, headache, vomiting (especially in children), constipation, this called “lactose intolerance”.

Test: measurement of the hydrogen concentration in exhaled air increases after absorption of lactose if the subject is intolerant

But if lactose is absorbed it accumulates throughout life in tissues, especially the lens and in the sheaths of the nerves where galactose is transformed into galactitol by aldose reductase.

Galactitol, very hygroscopic, attracts water, cracks the proteins of the lens, which causes early cataracts and compresses the nerves, which gives rise to peripheral neuropathies (obviously the earliest in diabetics, but this phenomenon also affects patients with non-diabetics who are heavy consumers of fast sugars and / or dairy products).

On the other hand, aldose reductase is inhibited by many polyphenols which are therefore protective.

Taurine also appears to be protective in an animal model.

There are several on the market. Not everyone agrees on their health effects, but one thing is certain: they are not the solution to weight problems on our planet. Since their arrival on the market (for example aspartame was discovered in the 60s and put on the market in Europe in the 80s), we really cannot say that the obesity problems have been solved. Far from there. Add to this that sweetened foods are sometimes (not to say often) high in fat, phosphoric acid (promoting osteoporosis), colors or additives and therefore cannot be assimilated to healthy foods.

Synthetic sweeteners have the following drawbacks:

NOTE THAT A FRENCH STUDY FOUND THAT THE CONSUMPTION OF DIET SODAS INCREASES THE RISK OF DIABETES.

Indeed, there are certain foods that increase insulin while they have no impact on blood sugar. Some researchers have been able to put forward that the cephalic phase of insulin secretion (secretion of insulin before the nutrients are absorbed, namely during chewing for example) is determined by the taste of the sugar and not by its fate. metabolic. They are therefore not “neutral” from a metabolic point of view. Indeed, sweeteners are detected in the tongue and in the digestive tract by the same receptors as those of food carbohydrates. This is why sweeteners interfere with the digestive absorption of carbohydrates and increase it when they are ingested concomitantly (a plate of pasta or bread with a diet soda for example).It is interesting to note that this effect varies according to the sweetener used, sucralose being the one that most affects the absorption of carbohydrates.

While the consumption of sweeteners is encouraged among diabetics to help them consume fewer calories and better control their blood sugar, they can actually have the opposite effect, it is a shame …

The most natural sweetener currently appears to be stevia.

But the products which contain it are often of poor nutritional quality (industrial products) and that as a sweetener, it therefore has the same faults, namely the maintenance of the sweet taste, etc …

Malrodextrins and xylitol are better options. The best option is to sweeten naturally with grape juice, mashed bananas, figs, etc….